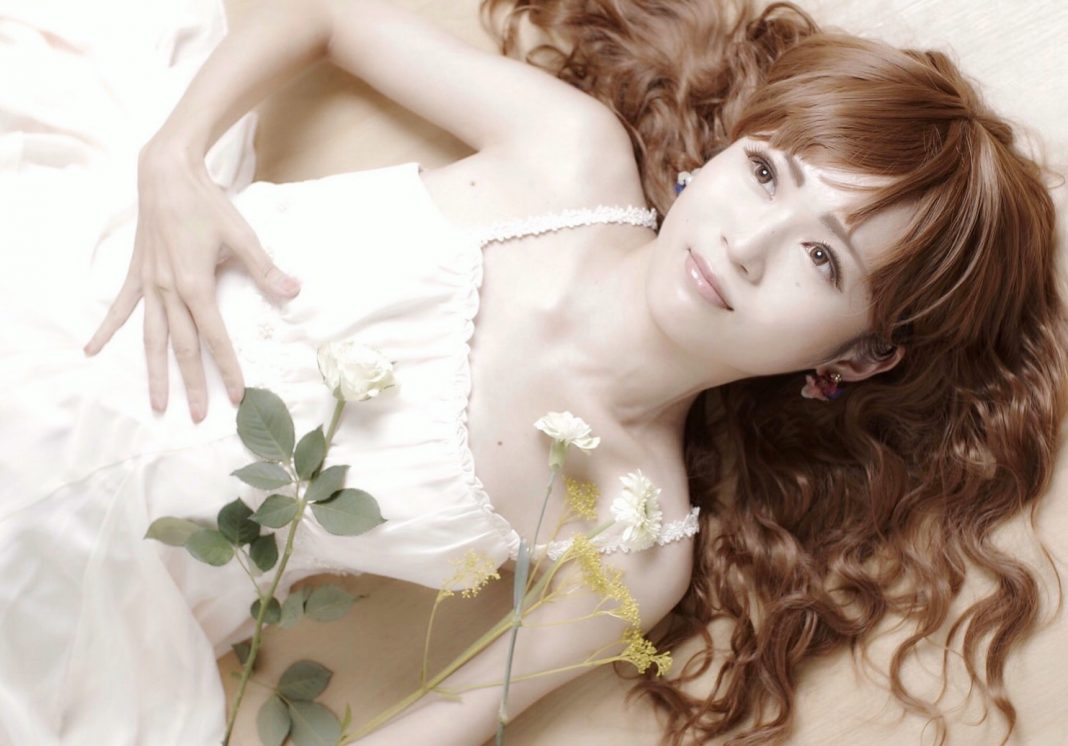 This is the 2nd article continuing from previous article of Romania!!
After studying and homestaying in Russia, I finally came to Romania.

It’s a episode of my great met with Laura. By the way, Laura is a Romanian woman working at a local TV station, and we got to know each other because we were in the same compartment on a night train from Beograd to Bucharest.
For Romania’s first article on that, you can see as below ↓.

Laura said, “We will have a party at night, so if you want, you can come with me!”.

Laura said it was a memorable day for her to return to Romania after a few years study in France, and that party was held by her best friends were to celebrate her return as welcome back.

*Sakuran is a movie based on Oiran by Moyoko Anno.
Mika Ninagawa was a movie director and Ringo Shiina was singing the theme music.

“The scenery and the concept is very beautiful. But the song sounds very vulgar.
I thought Japan was a more humble culture, isn’t it?”

For Laura, the song of Shiina Ringo in “Sakuran” sounded something not good.
We were watching “Sakuran” and other videos/movies created by the Laura’s friends or other amazing artists, and the time passed quickly.

Adi was kind enough to give me a CD with the MP3 from his PC when I said “I want to get a CD of a famous Romanian singer and go home.”, truly appreciate.

Laura and Laura’s friends were all Romanian, so they could speak Romanian, but from the beginning to the end of the party, they spoke all the conversation in English.

Laura’s friends were all excited and surprised to hear that I had come all the way from Japan and was traveling all by myself along the way from Russia.

I really wanted to stay longer, but on the way I started to doze off from exhaustion, and Laura was kindly saying, “Let’s make it finished, we can go home.”.

Anka, Laura’s friend sent me on the way to the hotel and saying,
“It must take a lot of courage to do something new.
I’ll give you this flower in honor of your great courage all the way of your travel.
Thank you for coming to Romania! ”
She gave me a bouquet on her way home, There was a picture of the bouquet! 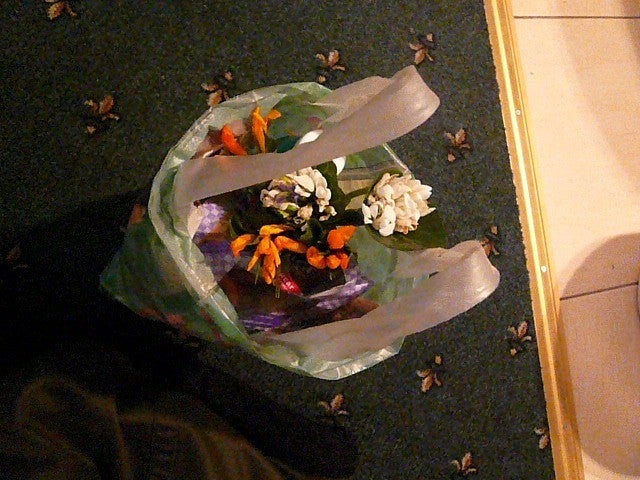 It was March and it was just “World Women’s Day” and in Romania there is the custom to send flowers on this day, so happily I have got a bouquet and went back to the hotel.

The next day I went to Sinaia and Brasov.
Laura was kind enough to say “I will introduce you my recommended hotel in Brasov.” and I decided to stay at that hotel in Brasov.
I found the name of the hotel on my travel journal! The hotel’s name is “Economat”.

… But! Sadly I found one episode written on my Japanese guidebook saying,
“In the past, Japanese travelers were attacked and injured by a thug on the sidewalk with the forest on the way to the hotel, so please be careful.”
And I got quite scared …
Luckily, the thug didn’t show up at my time, so I was really relieved….

To be honest, it is just luck whether you will meet a thug or not, so I have to say big thanks to the God many times.

And the hotel itself had a great view and the food was delicious, it was really great!! 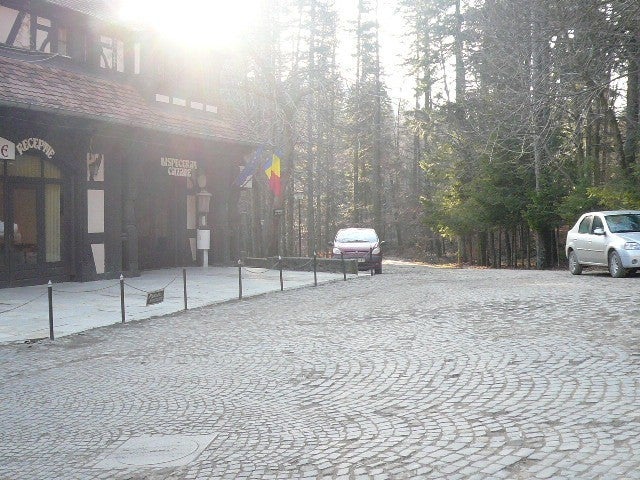 By the way, I stopped at Sinaia on the way to Brasov.
(Sinaia is located between Brasov and Bucharest,)
I traveled Bucharest, Sinaia and Brasov by train, and I remember the train was very new at that time! 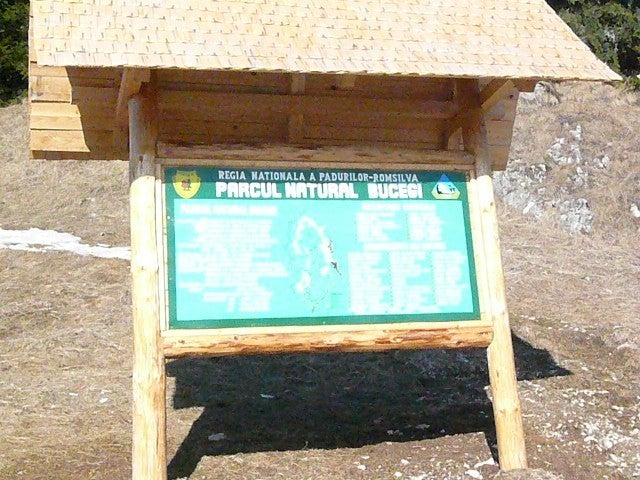 By the way, I rode a ropeway in Brasov. 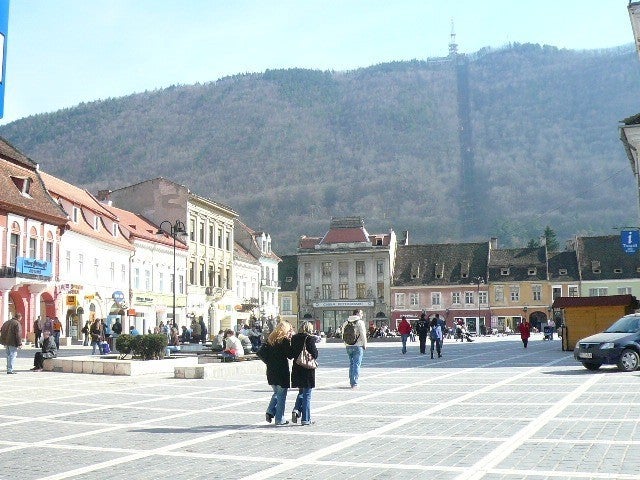 Goodbye to Laura and “Pay it Forward”

And I was writing a big thank-you letter to Laura with my illust.
I couldn’t thank Laura enough, since she showed me around the city, invited me to parties and introduced me to friends, and invited me to her lunch at home.

I was wondering if Laura really wasn’t a good person …. But even then, I thought I would accept it.
(This is a very bad expression, but there were sadly sometimes bad people in Eastern Europe when I traveled around by myself as 20years old young girl, so I was always prepared for the worst and for in case.)

“Laura, thank you very much. I’m very glad that I can meet with you, Laura. I really appreciate it.”
I said.

And Laura said,
“Me too, and please do not say thanks to me.
Since, when I was young, I was traveling like you.
And I met wonderful people and they helped me lots then.
So I gave it back to you.
You give it back not to me, but to the people who need your help in the future.”
She said to me.

Later learned that what Laura said was “Pay it Forward”.

I have never met anyone in Japan who would say/tell such wonderful things to me.
When I told them I was going on a trip from Russia to Eastern Europe, most of Japanese friends said, “Are you okey!? Please stop it.”.
And I understood that just they worried me.

But, in fact, this is how I met Laura in Romania and she was such a wonderful person.
I was moved that there is such a wonderful person in the world ….
Regardless of the country’s economic situation or safety level, in every country there are wonderful people and bad people (It’s the same in Japan too.). I just thought from my heart that meeting Laura at the age of 20 was the treasure of my life …
I really appreciate the God made me meet Laura.

Laura’s words have become a treasure in my life.
Since then, I have been happy to show foreign friends in Japan when they came to Japan.
I didn’t get any compensation, but I’m happy just doing that.
Also, when I saw foreigners who need help, I decided to talk to them in English and help them.
I think this is because the experience of meeting Laura at this time is surely still in my heart!

*When I was writing this, I remembered what happened at that time and cried.
I remembered my pure/innocent feelings when I was 20 years old, before I had a hard time when I was on the job in financial industry.
At that time, I was traveling with such a pure heart that I could meet someone like Laura. I rewrote that I want to remind and do not lose such kind of feelings of those days ….

By the way, even in Japan after that, I experienced another “Pay it Forward” episode and I met another amazing woman. I would be happy to write about this in another article, and it was also a kind of miracle.
And I truly appreciate that I could have received such beautiful things so far, and I would like to return them to the people who need my help(*^__^*)