HikarigreenTokyo -Japanese Cosplayer and Financial Economist who've been to 50 Countries -
Home Japan Otaku/Cosplay About Otakus in Japan My Forbes Article: From 17+yrs exp. Cosplayer, the Values in Societies must...

This is the article for Forbes Japan serialization, but this time I would love to show that to dear foreign friends, so I wrote here in English.

And you can see original article below in Japanese!
*My Forbes 1st Article: From 17+yrs exp. Cosplayer, the Values in Societies must Change

After being a fund manager at a domestic and international financial institution for ten years, I started up a clothing brand, which had been a dream of mine for a long time. Alongside that, I have been active as a cosplayer on a global stage for 17 years.

Since starting up my business, I’ve had the opportunity to talk with all kinds of people, but people often talk over me on this kind of topic.”I don’t know what I really want to do with my life. I don’t know how to be true to myself at this point in time.”

At that time, I told them that I thought they should give up what they didn’t want to do, little by little. However, I felt that that wasn’t enough to get the message across.

Since this is a rare chance to do so, I would like to write about my own example, as well one idea of mine.

I started to do cosplay 17 years ago, when I was a student.

Back then, cosplay was not as big as it is now, and it was something that was enjoyed by a small community.

At that time, there was more prejudice against otaku (geeks) than there is now, and there were many reports about otaku in the media using the phrase “social problem children”. As a result, when I was cosplaying during my years as a student, I thought, “There might be something wrong with me socially, and if the people around me find out that I cosplay, they might look at me coldly. That’s why I’m definitely going to keep quiet about it.” I was unable to love cosplay, my favorite hobby.

I was also envious of people with hobbies like snowboarding and diving, who came into their own in both their private and public lives. “In my next life, I want to be born as somebody like that. Why do I have to be into cosplay…?” I also lamented.

At that time, I referred to the version of me who was cosplaying as the “childish me” in my mind.I even thought, “I’ll quit cosplaying when I’m too old for it. It’s just used as a fodder for prejudiced views, and I won’t tell anyone about it for the rest of my life.”

In fact, I was even concerned about people making casual remarks like “are you still doing that cosplay stuff!?”

Looking back, it wasn’t actually worth it.

Even if the people around you make fun of it and don’t approve, “I can’t give it up.”

But to tell the truth, I still haven’t quit.

Although though not many of those around me acknowledged the value of cosplay, and although people said that it wasn’t normal, that it was childish or even strange, I didn’t stop cosplaying.

If you think about it, will there be that many things in your life that you would like to continue, even if people around you are against it?

Aren’t those the things that you love from the bottom of your heart?

The reason you would decide to stop doing something because people made fun of it, or because it wasn’t popular anymore, isn’t because you do it because it excites you. After all, wouldn’t it be because you were doing it relying on other people’s point of view, conscious of what those around you were thinking about it?

“You are still dreamer even when you’ve grown up, aren’t you?”

I’ve heard those words a lot too, but what does growing up even mean?

When I was a child, I thought that I could grow up by making all of the parts of me that were different or strange normal by society’s standards.

In my case, I would not go to countries that I knew nothing about such as Russia or Israel on my own for curiosity’s sake, and when I was too old for it, I would stop cosplaying and making music, put on a template-like clothes and makeup like a real adult, and build a career in the financial community. It might have been to keep emulating behaviors that are valued highly societally, according to the standard deviation in society.

“Growing up”, “behaving properly”… Such words are actually vague.

The way society views things will change over time

Someone like me might have been considered completely insane a little while ago. But as the times change, the way society views things changes too.

The above-mentioned cosplay is one of those things. A completely misunderstood hobby that might have made you a weirdo ten years ago is now part of “Cool Japan”. I’m really glad that this current era has come around.

However, the more you go out in society, are burdened with things and take on a position of responsibility, the more you are obliged to be aware of your position in the society and there are many things that are easier said than done.

But that’s the reason why the moment you get tired of your everyday life and have doubts, if you just forget about everything and just think about what really excites you, the future you choose will definitely change.

Thank you for reading, and also you can see all the Forbes Featured Articles here! 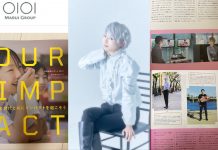 Giyuu Tomioka as water pillar from DemonSlayer Cos