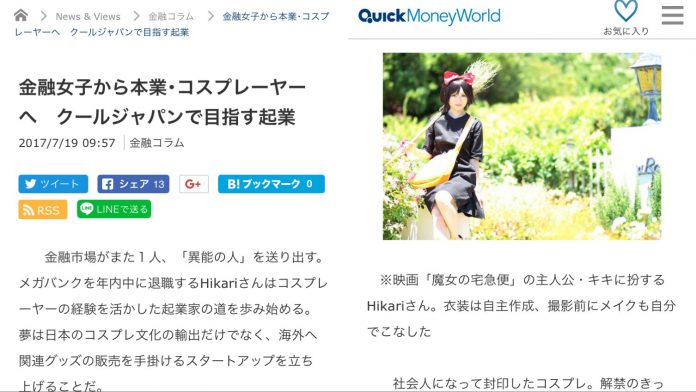 My article about financial/cosplay career was on one of the most popular traditional Japanese/Financial News source, Nikkei Quick! (Japanese Article)

Surprisingly my own article was on Nikkei quick which is one of the most popular traditional Japanese financial newswire. I was there since I am cosplayer but on the other hand financial professional in one of the biggest financial institutions and works for 10 years as institutional investor/economist of financial professional.
And this article has been the most popular and read then for months, it makes me happy since I do not want to make border between Cosplay/ Financial Professional.
I am doing cosplay/financial career both 10+ years but I feel proud of them both and again I love cosplay so much!!
金融/投資系Newswireの日経Quickに私の記事が載りました♪当時トップ人気の記事だったと記者さんから聞いて嬉しかったです、本当に感謝です☆
>>The Article URL:
金融女子から本業･コスプレーヤーへ クールジャパンで目指す起業
And below is the translation of that Article in English (as of 2017/7).
—–
The financial market will send another “unique professional”. Hikari, who is retiring from Mega-bank(Mitsui Sumitomo Banking Corp) by the end of the year, will start her entrepreneurial career by leveraging her experience as a cosplayer. Her dream is to start a startup that not only exports Japanese cosplay culture, but also sells related goods overseas.

Joined a major life insurance company just before the Lehman shock and became a stock investment division in the first year
Hikari’s “investment elite” may be the right word to describe her career. She joined a major Japanese life insurance company just before the collapse of Lehman Brothers, and was assigned to the stock investment division in her first year. Although she had no interest in investment until then, she became interested in it as she studied stock analysis. She used terminals from financial information vendors such as QUICK to stare at data every day. Since she could use English, she was also in charge of checking investment in overseas private equity funds (PE) and hedge funds (HF). She started to deal with global funds.

When the collapse of Lehman Brothers coincided with the period of personnel rotation, she chose to move to a foreign life insurance company. She was also involved in PE and HF investments. After that, she joined a mega-bank(Mitsui Sumitomo Banking Corp) by chance and continued her investment business.
However, soon after joining the bank, she was pointed out that “The way of business is different.” and felt culture difference. She began to wonder if she could continue working as a Japanese domestic banker, but she would just go a different path than what she wanted to do.

She started to cosplay at the age of 16 to be said “cute” and got confidence on it
She was 16 years old when she started cosplay. She was traumatized by bullying when she was in junior high school, but when she was going to cosplay convention for the first time, a veteran cosplayers were approaching to her and recognized her as a “cute” which led to a big turning point for her.

“I was told by the boys that I was not cute, but now I am confident that ‘I’m cute too.'” (Hikari)

*Hikari impersonates the main character of the movie “Witch’s Delivery Service”. I made the costumes by myself, and made the makeup myself before the shooting.

Cosplay, she kept secret that and not opened during the time in university and even after graduate the university. And she stopped cosplaying since her job as institutional investor was very tough and she need to work and study from morning to late at night.
But the Financial Crisis was the turning point for her to come back to cosplay. The financial market has been gone into mess and collapse and then she decided to dresse up again to relieve her stress and for a change.
At her own expense, she also did “overseas expansion” as a cosplayer. she now has many fans in the U.S., Europe and other Asian countries.

When she went there, she realized that although cosplay is very popular in Japan, but it is difficult to obtain related goods/merchandises. Business models that combine hobbies with profits are gradually expanding and she has the connections she built when she was involved in fund investing in the financial industry.
When she told foreign investors and Silicon Valley officials about her future related to Cosplay, some people showed a willingness to invest, saying, “That sounds interesting. Let me know if you need anything.”.